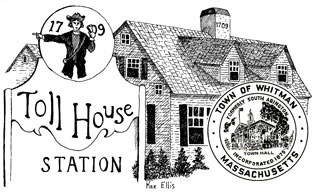 Welcome to the Town of Whitman! Whitman was originally settled and was known as the Little Comfort section of Bridgewater. The area became part of the Town of Abington in 1712.  Eventually, in 1875, the area was made a township by the state legislature and was originally known as South Abington.  At a town meeting on May 3, 1886, a vote was taken and the name was changed to Whitman.

Town Incorporation
At the time of the town's incorporation, there was no public water system, and each household and factory had to have its own well. The town eventually obtained the franchise for water from Silver Lake but was unable to finance the system. The town turned the franchise over to Brockton with the stipulation that Whitman could receive its share at a special rate. Silver Lake water was turned on for Whitman on January 2, 1905.

Early Development
During its early development, the Town of Whitman was largely an agricultural community. The first industry developed on the downstream side of the Schumatuscacant river. It was in this area that the first industrial canal and tunneling of the colony were constructed in 1745. Trees from the town's forests provided a source of timber for several seaport towns. Timbers from Whitman were used to construct the frigate U.S.S. Constitution also known as Old Ironsides. The town soon developed into an important manufacturing center. The first shoe racks were manufactured, cannon balls were cast at Colonel Hobart's Bell and Cannon Foundry, nails and tacks were made, and wooden boxes were built. During the 1800s, many cottage industries established in the 1700s began to develop into larger businesses. By the mid-1800s,  several of these businesses grew into large scale assembly line factories. At one time, the Dunbar, Hobart, and Whidden Tack factory, erected in 1864, was the largest in the world. The D.B. Gurney Company dates back to 1825 and is still in operation in Whitman today. The leading manufactured products were shoes and boots. The shoe industry and related industries became the largest employer in the town, and remained as the largest employer until the mid-1900s at which time the shoe industry began it's steady decline.